After downloading Counter-Strike 1.6 game, the next step should be looking for some cool servers to play in for sure! However, finding the right servers can be a little bit difficult sometimes.

For that, we have included this CS 1.6 Download which will allow you to find the best and well-configured game servers. All of the servers included in the Internet list are our servers. That means that we have full control over them, making sure they are always one of the best!

You can download CS 1.6 with full list of servers here with the best possible ease and performance. You can choose from different download options which will give you the fastest way to download the game wherever you live!

Also, Counter-Strike 1.6 Installation shouldn’t take anything more than a few minutes. In all of our game editions, we use the latest compression and installation algorithms. That allows you to download a super compressed setup file and even install it within minutes!

To start your download, select one of the methods listed below and click the button. The whole process shouldn’t take anything more than a few minutes. After that, you will be ready to play at the best CS 1.6 servers! 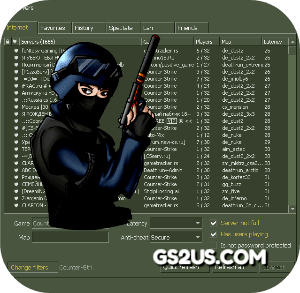 Counter-Strike 1.6 servers are game servers that can be made locally or online by anyone worldwide. That means you can create your own server to play locally in LAN mode with your friends or to play online in a public server!

So, unlike many other games, CS 1.6 allows you to create your own game server that you can configure it the way you want! And the best part about all of this, that it comes totally for free!

In other words, you are able to host CS 1.6 server whenever you like and take full control of it. That includes literally everything starting from the game mode played, the maps and even the additional plugins that you might add.

However, to be able to do that, you will first have to follow some easy steps. The first one will be to download CS 1.6 NoSteam or Steam version. That can allow you to hos the server on Windows OS if you are planning to. Also, it’s necessary to make any kind of testing before launching your own server, which this version can be very useful for it!

How to find the best servers to play in?

After downloading the CS 1.6 game, you should be looking for some cool server that you might be playing at regularly. However, picking the right server can be some kind of difficult for some players.

So, many people keep bouncing from server to another, without finding anything that suits perfectly their needs. For that, we will help you up to pick the best Counter-Strike 1.6 server, that you will like playing within it for sure!

With following the above step, you should be able to have a good list of CS 1.6 servers that you will love for sure! Not only you like the game mode within them, but also we will try to help you out finding the most performing ones.

Game mode should be the first thing that you look at when selecting your best Counter-Strike 1.6 servers. After all, not all the players like the same gameplay. So, while some like the classic and old gameplay of CS 1.6, some others like some horror and extra editions like the zombie modes. Both are free to choose, so you are! And we will be here to help you with which one to choose and how to find servers with the desired game mode!

The best way to filter CS 1.6 servers by game mode is to use some game monitoring website. Take GameTraker as an example, it will allow you to filter out the best servers with the desired game mode and even where it’s located!

To do that, you should type the desired game mode name in the search field. That even includes the classic and single map played modes, which can easily found by typing the map name with the “only” term.

Ping and location are one of the most important things that you want to check before joining or playing in any Counter-Strike 1.6 server. That’s especially if you have a slow Internet speed, which makes it a little bit harder for you.

However, if you have some good Internet connection (100 Mbps for example), you don’t have to worry about this part. But, for the majority of the players, it’s something that should be really checked if you want to have nice and smooth gameplay, which ensure more fun while playing!

The basic idea about this is the distance between you as a player and the server. So, the longer this distance will be the more it will take to refresh the data between you and the CS 1.6 server. In most of the cases, that depends on the players’ Internet connection, but sometimes it can be a server-side problem if it’s some poor server with no minimum requirements met.

Tol filter out servers by the ping, you can do it in 2 easy main ways. The first is using the game browser in Counter-Strike 1.6 game. By clicking the ping filter on the top, you can have the servers listed from the best ping to the worst (the lost ping the better it is!).

Also, you can filter them out using some game servers monitoring like GameTracker. However, this one won’t let you filter the servers by its ping but by the location. That’s due to the fact that they can’t check the connection between you and any of these CS 1.6 servers!

However, you are still able to filter them using the current location and how far are the servers, which is pretty much the same! So, make sure to pick one server that’s located as nearly as possible, which is more recommended to pick one in the same country or one of the countries next to yours!

3. Test to check the best

Okay, now you have a sweet list of low ping CS 1.6 servers that you can select any of them. With all the servers in the list with you desired game mode and with decent ping to play with, basically you are ready to start playing. However, it’s more recommended to test many of them just before selecting the one you will play in regularly.

For that, make sure to test all of these Counter-Strike 1.6 servers carefully depending on some bases. The most important one of them is either the servers contains any bugs, problems or something that really bothers you.

Also, you might need to check the server admins reputation. You don’t want to end with some admins or community that bans you from the game without any strong reasons!

After all, not everyone is the same and all people pretences are different. So, take your time and you will end up with some cool list of servers that you like to play in! Counter-Strike 1.6 has over 10k servers and there’s many of them that suits yours, all is left is to search and find the best!

Making things even easier for you, we have included some cool servers here. These servers are owned by GS2US Community, which we make sure to make them as best as possible always! The current servers are well configured, which you should have a decent ping within wherever you are.