Download Counter-Strike 1.6 GameTracker version which allows you to play the game totally for free. CS 1.6 GameTracker is a special non-Steam edition that looks all the similar like the Steam original version of the game.

Here you can download it using direct, torrent and Google Drive downloading options. That will allow you to download the game using the fastest possible way, providing you with more ease and performance!

After downloading the CS 1.6 setup file, it will allow you to install the game with the fastest possible way. That’s due to the latest installation and compression algorithms, which will allow you to get the game running in a few minutes. Counter-Strike 1.6 GameTracker edition is a special version of the game that looks all the same as the original Steam.

This edition performs in all the same way like the Steam version of CS 1.6, allowing you to play the game offline or online without any necessity to pay any kind of costs, fees or make an account for it.

GameTracker edition also looks the same way. That includes all the players and hostages models, game sounds, maps and even the sprites and colours.

To start downloading this edition, select one of the download buttons given below. That depends totally on your needs and the speed of your Internet connection.

GameTracker is all in one FPS game servers tracking website, gaming forums. It has too many features for both servers and communities owners and players. That includes everything that any player from different online games would ever need, some of them are the following.

Not to mention many other features that can be useful for you as Counter-Strike 1.6 player or server owner! In fact, that’s one of the reasons that made us create the custom CS 1.6 GameTracker edition. 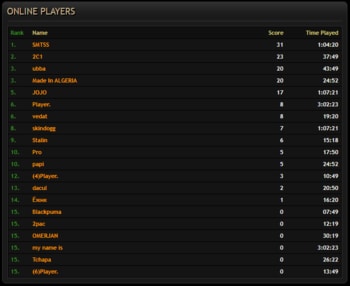 Live players monitoring is one of the best features on the GameTracker website. In fact, it allows you to track the players of any online server in any game even rather than CS 1.6 in real-time.

That’s something that can be very useful especially for game servers owners. Which will allow any of them to check the server without any necessity to open the game or enter the server!

For example, live CS 1.6 server monitoring will allow you to check the current players in the server, the time spent of each one of them and also everyone score and current rank in the game.

The best part that it can be used with any game edition and won’t require the GameTracker CS 1.6 version specifically. So, whatever any of the players are using an edition of the game, Steam or Non-Steam, he will be tracked and added in the live list! 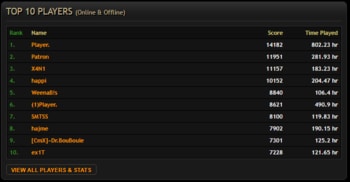 Saving and taking track of the most active players in the server can be something that can help, especially with the game servers owners.

After all, if you want to keep server active, you have to keep the players active, especially in CS 1.6. That will allow you as a server owner to reward the active one of the game.

Also, this feature save both of the time played in the server by a player and the total score made. Which can be very useful against any type of spam-like being all the time AFK in the spectators! 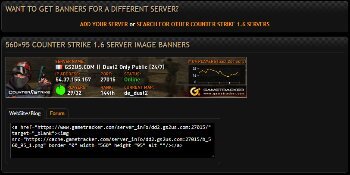 CS 1.6 GameTracker game servers banners can be something very useful. Not only it will let you advertise the server, but you can use it for many different reasons as well!

So, first of all, these banners will allow you to advertise your game servers in some well looking and detailed way. The banner includes all of the necessary details which majority of the players would like to take a look before entering.

The details shown are the following:

With all of them, any player would eventually like to enter the server if it’s really worth it. Also, these details can help you out if you have a gaming community, which will allow your players to filter servers and join one of their own preferences!

Another way these banners can be used and useful is advertising on different websites/forums. That’s due to the fact that GameTracker gives already a ready HTML and BB codes which can be copied and pasted to any website or forum.

One of the main ideas that you can use here is to attach the code in a forum signature. That way, you can simply advertise your Counter-Strike 1.6 server using the banner below your messages.

Forum is one of the best ways to communicate with players in an organized way. It will allow everyone to create a topic in which everyone else can reply and give his own opinion.

So, for GameTracker, having an online Forum was a very interesting thing to keep the communication between players of different games. That will allow you to post anything about any game like CS 1.6 in a very organized way.

Forums can give you the opportunity to make many different things that can be useful for you and your servers. That includes some ideas like asking for help when it’s needed, giving suggestions about the website or even complaining about what bothers you!

Also, you can it for any kind of different reasons like advertising your Counter-Strike 1.6 server, talking about general purposes or anything that comes in mind!

Gaming clans is one the best thing that can keep your server or some game active. It keeps the competition between players and allows them to play as a united and an official team.

Especially in CS 1.6, GameTracker allows you to create a clan and manage all the members on it. Also, you will have a separate forum and news blog, which you can use to organize your clan, community or whatever you like!

Keeping track of things is one of the most necessary things to well manage something. That goes the same for the online gaming communities and servers, which you have to take a look at how things are going on each time in a while!

GameTracker records everything up for you. It autosaves any kind of data that you might be in need of it, allowing you to easily understand how things are going on.

That includes the most played maps in a server, its historical world rank and even its downtime. So, even if you have some problem with it, you can simply check any of these data and it will let you know simply!

The ranking is a very interesting thing that you should keep in mind and use it in order to improve your server. This feature can be very useful for both players and community managers!

So, if you are a player, you can simply look at which servers are well ranking. Those usually contains the best features and are simply are the best. Also, that allows you to check if one of the servers is worth to join permanently and how active it is compared to other servers.

In fact, the same goes for the owners of the servers. So, if you are one of them, that will allow you to keep track of your CS 1.6 server(s). Compared to other servers, you will know how it’s performing and either the players are liking it or not!